In Nairobi, the number of residents able to access actionable Weather and Climate Information Services increased from 56% to 93%, reaching around 800,000 residents, as a direct result of the DARAJA initiative. 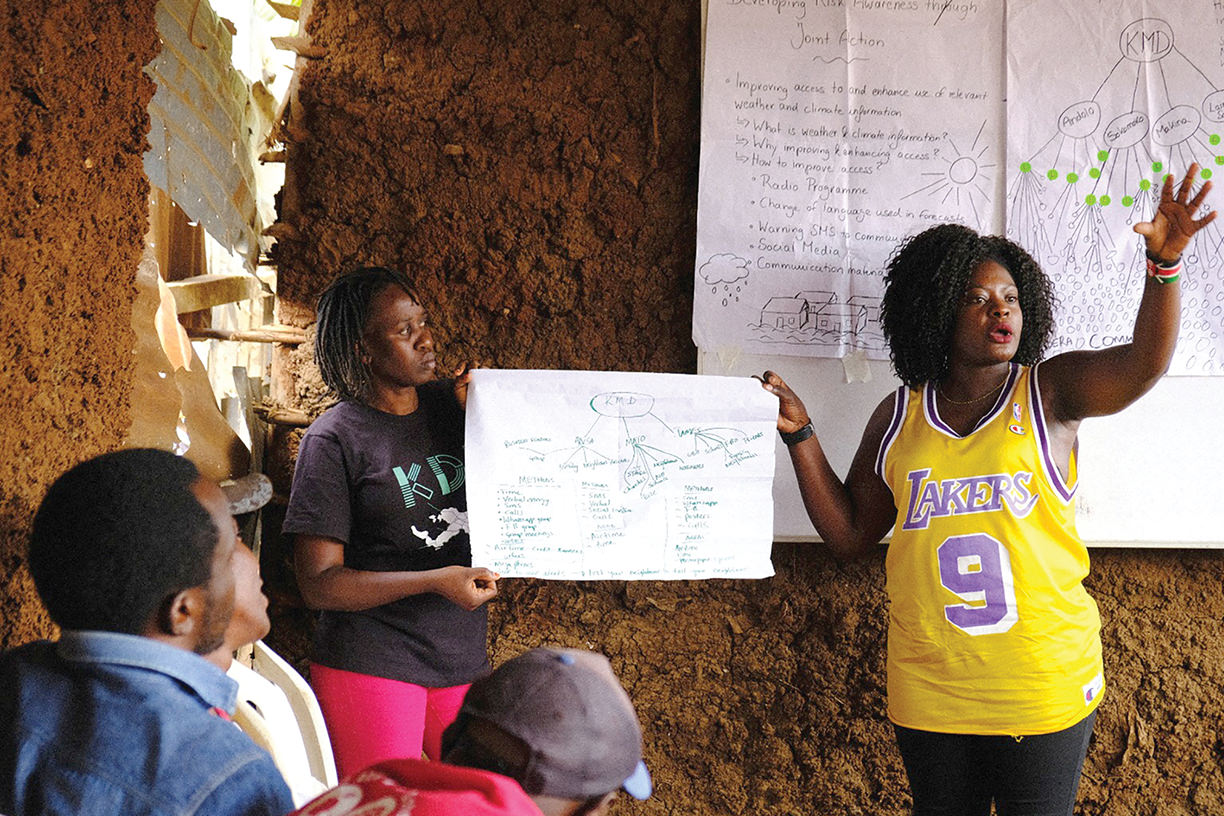 Urban residents operate inside a complex and interconnected system. However, often, various actors in the city system operate in fragmented ways. Historically, National Meteorological and Hydrological Services (NHMS) have focused on developing Weather and Climate Information Services (WCIS) for sectors such as agriculture, aviation and marine. As urban cities are growing rapidly, leading to the increased need for WCIS, NMHSs need to work with urban communities to co-develop WCIS that are relevant for urban spaces. Developing Risk Awareness through Joint Action (DARAJA) is a global programme that aims to improve access to, and enhance the use of, relevant weather and climate information by residents of informal settlements in Nairobi, Kenya and Dar es Salaam, Tanzania leading to reduced loss of life and property.‍

Millions left in climate information darkness in cities across Africa, Asia and Latin America, climate change is heavily impacting the residents of informal settlements. Floods, storms and heatwaves are wreaking havoc on them. Yet the residents of these city settlements lack access to critical information that can enable them to take timely actions: reliable weather forecasts and accessible early warnings. Many look up at the sky as their primary source of information, unable to prepare for increasingly frequent extreme weather events.

The DARAJA service has worked with Nairobi and Dar es Salaam cities and its informal communities, and is currently being implemented in Jamaica. It is estimated that between 60 to 70% of Nairobi’s residents live in the city’s informal settlements. In Dar es Salaam, it is over 70%. Across the world, urban areas are growing at an exponential rate and pushing many people to live in urban informality.

DARAJA, an inclusive forecasting service, which operates at city scale and is localised further, also an early warning service co-designed with community members, will enable residents to be more resilient and better prepared to take adaptive measures. City authorities can also use this system for better urban management.

DARAJA has taken a systems-wide, co-production approach and has brought together disparate actors to work together for the first time, including the NMHSs, media, vulnerable communities and community development organisations amongst others.

Broadly, DARAJA focused to enable improvements in the way communities access information, making the information more relevant, understandable, and increased the capacity of communities, media, etc., to use this information to take preventive and adaptive actions.

1. In Nairobi, the number of residents able to access actionable WCIS increased from 56% to 93%, reaching around 800,000 residents, as a direct result of the DARAJA initiative.

2. 98% of the residents state that they use DARAJA information services to prepare for extreme weather through actions that avoid damage and loss such as moving possessions, strengthening roofs and clearing drains in the light of early warnings. Similarly strong results have been achieved in Dar es Salaam.

3. The impact of DARAJA in the two cities has generated a 20:1 return of social and economic benefits (SEB), surpassing the returns of traditional investments in early warning systems by a factor of 2 - 5x.‍

Through a user-centric co-production process, vulnerable communities are given agency and their requirements are validated.

Continuous direct interaction between users and the NMHS throughout the co-production process created an opportunity for the community to learn from technical experts, increasing users’ awareness and understanding of weather information. This heightened awareness and sense of ownership, which resulted from being integral in the co-production process, led to an uptake of forecasts, increased forecast-based action at individual, community and city levels, and improved trust in the system. This has also increased the NMHSs’ understanding of the users’ context and their needs.

These initiatives have motivated NHMSs’ to improve their products and services to meet the needs of users such as community development organisations and radio/media outlets amongst others. Feedback channels created between all the stakeholders has led to increased responsiveness, trust, and an improved forecast from the NMHS.

Following the successful demonstrator in Nairobi and Dar es Salaam, DARAJA is currently being implemented in Jamaica. Our vision is to scale DARAJA to provide actionable climate information and early warning services to 250 million people by 2026 and to ultimately to all 1 billion people living in urban informality.

In Afghanistan, the team strengthened the UK’s ability to swiftly set up a humanitarian response and contributed to the strategy of UN agencies and partners on key issues such as upholding the rights of women and girls.

‍Working with 41 projects around the world, all working towards supporting 1.5 million girls in the world into education presented a particularly complex problem for the SDDirect-run safeguarding team.

Find out more
Working in partnership with